Hey guys! I hope that your week is going well. I have had a frustrating last two weeks because of a nagging pain in my foot. About a week and a half ago, I went for a nice 6 mile run. I felt fine during the run, but the very next morning, I noticed some pain in the outer portion of the top of my right foot. I occasionally do have some very mild foot pain, so I didn’t think anything about it. I figured it would just go away in a day like usual.

The pain didn’t go away, and it actually moved to a different part of my foot. It wasn’t extremely painful, so I decided to go for a short 2 1/2 mile run with my husband one afternoon. As I was running the pain was bad enough that I was forced to walk. It was hurting to the point where I was actually limping for a couple of days after that.

I took a few days off, then tried to do another short run again. The pain was milder than before, and I ran most of the 2 1/2 miles. When I tried to run again the next day, the pain was worse again. I finally had to admit to myself that I was officially on the injured list. The frustrating thing is that I had no idea what I’d done to injure my foot. My mileage has been really low lately, and it just didn’t make sense.

So, I went to Dr. Google to try and see if I could diagnose my problem. I didn’t have any swelling or bruising, but there was a spot just below my second toe on the top part of my foot that was really tender when I pressed on it. That was one of the symptoms of a stress fracture. Stress fractures are tiny cracks in a bone and are typically an overuse injury.

I kept searching and found another possible diagnosis. Extensor tendonitis. The tender spot on my foot when I press on it is exactly where the arrow is pointing to. 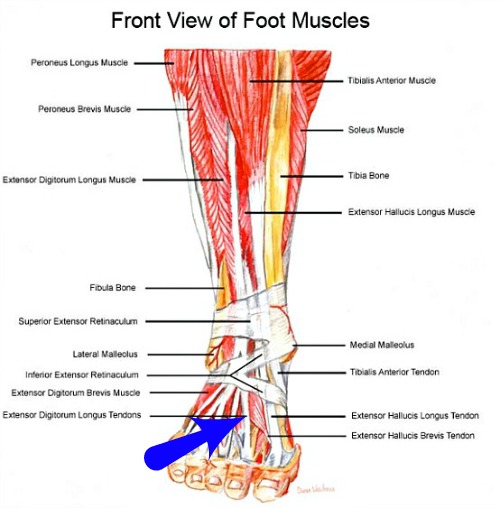 Extensor tendonitis is also an overuse injury, but can be caused by shoes that are laced too tightly. Laces that are too tight can put a lot of pressure on the top of the foot resulting in inflammation of the tendons. Another cause of this problem is excessive tightness of the calf muscle.

Of course, that area also happens to be where the 2nd metatarsal bone is, which is a very common stress fracture site in runners. 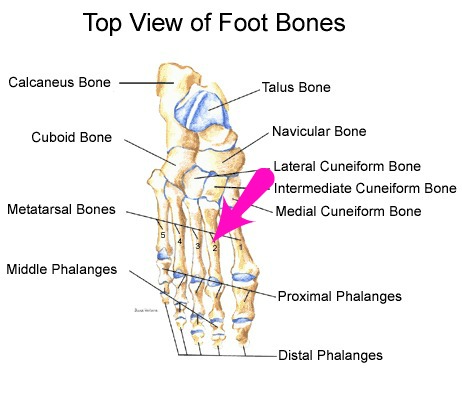 I have decided to just rest and ice my foot a few times a day to see if that helps. I hate to go to the doctor, and I’m afraid that he would just tell me to do what I’ve been doing. If the pain doesn’t get better after a couple of weeks, I guess I will have to. I’m really hoping that it’s tendonitis and not a stress fracture.

The toughest part of all of this is the fact that I can’t run. I’m trying to be patient, and appreciate the fact that this is only a temporary thing, and that I will run again. I’d probably be a little better by now if I hadn’t run those last three times, but I’m pretty stubborn. Learn from my mistakes, people.

Have you ever had a stress fracture or extensor tendonitis?