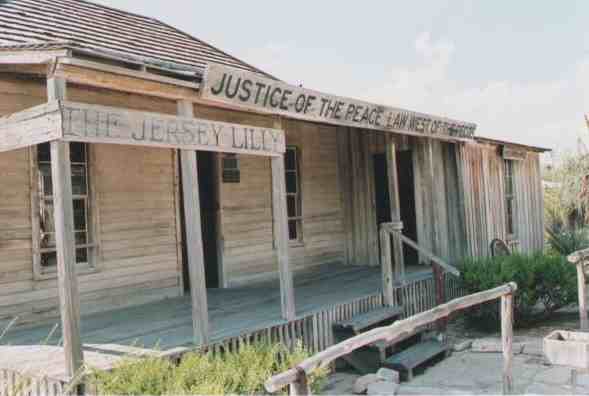 During a trip out to West Texas we came upon the Judge Roy Bean Visitors Center in Langtry , Texas.

Judge Roy Bean was the man deemed “the law west of the Pecos”.  He was a true legend in his own time ruling west Texas with his own kind of justice.

The Judge Roy Bean Visitor Center in Langtry, Texas is a Texas Department of Transportation’s Travel Information Center,. They have loads of information not only on Judge Roy Bean, but all of Texas.  Friendly Travel advisors answered our questions and provided us with maps, travel brochures and different points of interest.  There are six dioramas that entertainingly portray highlights of Judge Roy Bean’s career inside the visitors center.

Behind the visitor center,  we were able to walk through the rustic saloon, billiard hall, and courtroom where Judge Roy Bean held court with a six-shooter by his side.  He named his business after an English actress that he was infatuated with. Her name was Lillie Lantry and she was known worldwide as “The Jersey Lily”. Due to a misspelling by the painter, the sign out front of the saloon reads “The Jersey Lilly”. 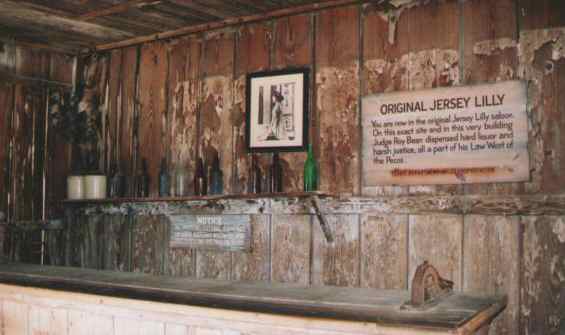 Judge Roy Bean had a sign on his home that read “Opera House, Town Hall and Seat of Justice” because he hoped that someday the actress would come and perform there.  Despite several letters inviting her to come, she ignored his request. That is, until he wrote that he had named the town after her.  Unfortunately, by the time she made the trip to Langtry for a visit in 1904, Judge Roy Bean had been dead for several months.

Today railroad historians state that Langtry was named for one of the foremen on the construction crew, but Miss Langtry was never told that.

Besides the “opera house” and “The Jersey Lilly” saloon, there is also a Cactus Garden Interpretive Trail that is home to prickly pears, agave, and  yucca plants.

Whether you are interested in learning more about Judge Roy Bean or not this is a worthwhile stop, if for no other reason than the free travel information and clean restrooms.