This past Sunday, I ran my second half-marathon! I woke up at around 3:30 AM and couldn’t go back to sleep. I got up and drank some coconut water (my usual pre-race drink), then laid back down to see if I could get a few more minutes of sleep. We had been out of town the day before, and I ended up not getting to bed until around 12:30 am. I had planned to wake up at 4:30 AM. I never did get back to sleep, so needless to say, I was exhausted. I let my husband sleep in a little longer and went to check on the weather conditions. This is what I saw headed our way. 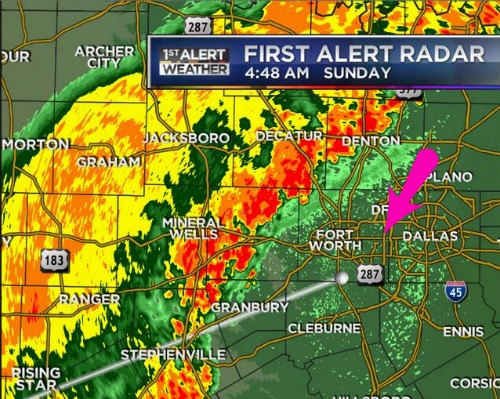 The pink arrow is pointing to the Irving/Las Colinas area where the race was taking place. Um, not exactly what you want to see on race morning. I wasn’t sure if they would cancel the race or not, but I went ahead and got ready to go. I was hoping that the storms would go through quickly and be done before race time. They hit at our house just as we were leaving. We drove through heavy rain to get there. My husband thought I was a little crazy for even wanting to try to go, but I guess that’s the runner in me? I always say that I owe him big time for going to these events with me and taking pictures, but I think I REALLY owe him this time! 🙂

Besides, my brother and his friend were coming up the Dallas area to run the Wounded Warrior Half too, so I knew that they would be there. They both live south of the Dallas area and arrived early. My brother had texted me that the race had been delayed until 7am. That was good news because it was raining too hard to drive the normal speed limit. We arrived at the race site and parked in a parking garage. Thank goodness, for the parking garages and hotel lobby. It gave the runners plenty of shelter from the rain and lightning.

You can tell from this crappy parking garage pic just how lovely the weather was that morning. 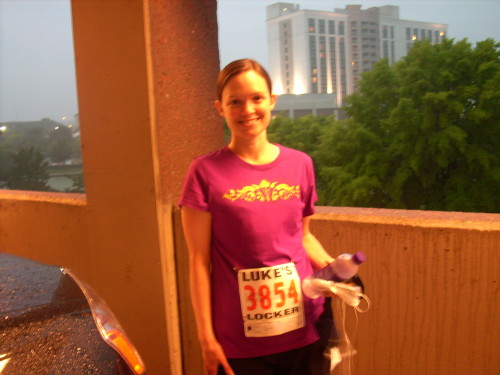 We made our way over to the Marriott hotel where most of the runners were waiting. They announced that the race was now delayed until 7:45. They said that the lightning would be out of the area by then, but that it would still be raining. At 7:40, we headed to the start line. 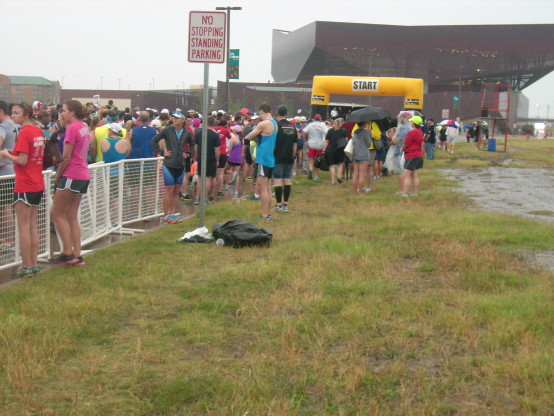 I’m not sure if we missed any more announcements or what, but the start didn’t seem to go like they said it was going to online. There were supposed to be two corrals that were to begin in two separate waves. I didn’t see that happen, so I don’t know if we missed something or if the rain threw things off. Anyway, a horn finally sounded and we were off! 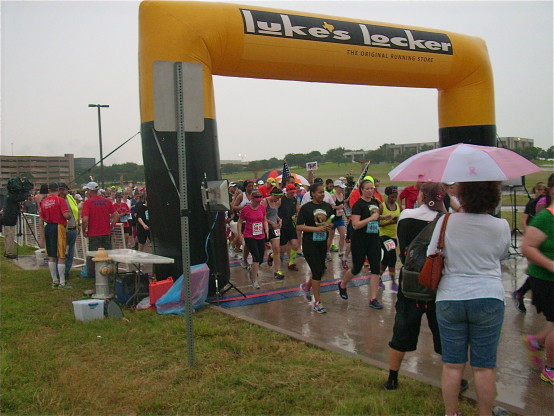 My clothes were pretty much soaked from the start. My shoes had been soaking wet from the moment we left the parking garage to head over to the Marriott because I stepped in a puddle. 🙁

It wasn’t raining really hard, just enough to be annoying. I should have brought a cap with me to help keep it off my face. Live and learn.

It rained for around the first 4-5 miles, then finally stopped. There was a nice cool breeze and fortunately the sun never came out while we were running to make things super steamy like we were afraid that it would. I took an energy gel at around mile 5. I had decided to carry my own bottle of water with me for this race. I thought that the water stations would be crowded because this was a bigger race than I’d ever done before, but that turned out not to be an issue. The volunteers at the aid stations were awesome! To come out in nasty weather to hand out water and Powerade and cheer us runners on really takes an awesome committment! Major thanks to all of them!

Understandably, there weren’t many spectators along the way, but the few that were there were super supportive! 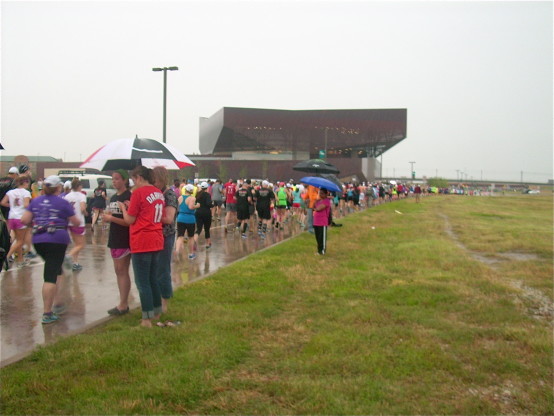 I started to feel a little tired about mile 7. The lack of sleep and lack of training was really starting to catch up to me. We’ve had so much going on lately and I’ve been having some trouble with my right quad so my training hadn’t been what it needed to be. My pace wasn’t what it was last year, and it certainly wasn’t what I wanted it to be for my second half. I knew when I signed up for this race a couple of weeks ago that the PR I had hoped for a few months ago wasn’t going to happen with this particular race. I decided to be okay with that and just run it the best I could.

My brother hadn’t really trained for this race, so he was running a little slower than he has in past races. He ran the whole way, and I stayed with him up until somewhere between miles 10 and 11, I think? I got a little behind, then got further behind when we all had to wade through ankle deep water. Because of all the rain, part of the trail was flooded. I’m the girl who refuses to run in the rain, and now I was wading through ankle deep water during a half marathon! Who am I?

Anyway, as hard I tried I just couldn’t catch up. I had hoped to cross that finish line together, but it just wasn’t meant to be. That’s okay. I wanted him to run his own race and if I couldn’t keep up, then so be it. In my first half-marathon, I hit a wall in between miles 11 and 12, and I was so afraid of that happening again that I think that may have kind of psyched me out, too. I had meant to take a gel at mile 9, but didn’t think that I could stomach it. I took one of the Re-Lyte Salt tablets I had with me instead and kept going.

I ended up doing a few run/walk intervals towards the end so that I could make sure that I had enough left in me to run that last quarter mile to and across the finish line. The cheering of the crowds at the finish line gave me the boost I needed at the end. I was SO relieved to be done! 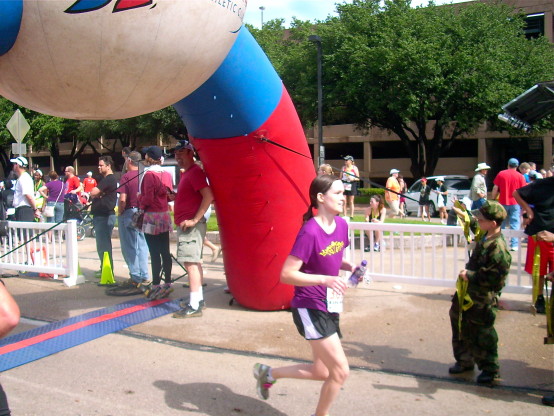 Ten minutes slower than my first half. Not the finish I was hoping for. I had to walk some, which I hate doing during a race, but I’m not going to dwell on it. Conditions were far from ideal, and I feel like I did the best that I could do considering the lack of sleep, bad weather-related conditions and poor training. Plus, I got to run my first race with my big brother. 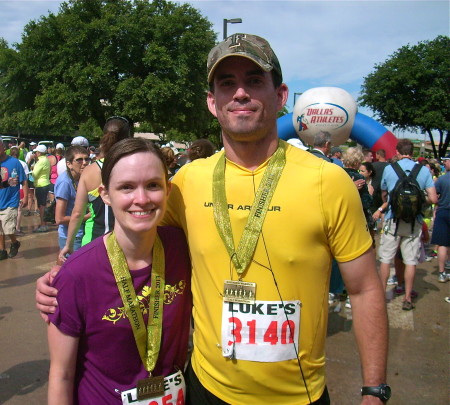 Oh, and doesn’t this make for a cool backdrop of a finish line photo? The race ended at Williams Square where The Mustangs of Las Colinas are. 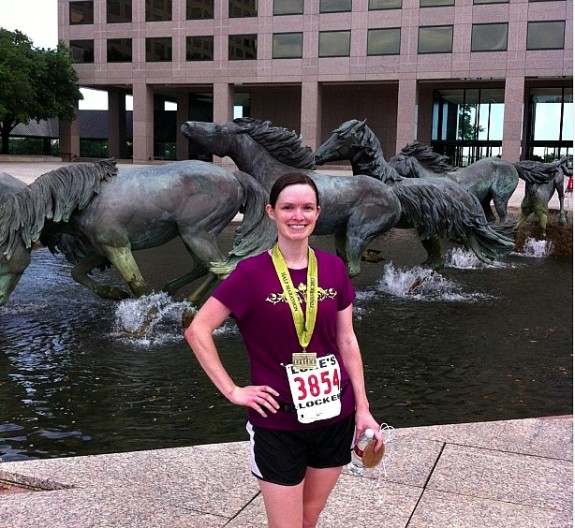 Fun Fact: When my husband and I were first dating, we drove up to Dallas for a day and while we were there, we went to see the Mustangs at night. They are pretty during the day, but when they are all it up at night, it’s even more beautiful! The place has special memories for me because of that, and finishing a race there 18 years later was just incredibly neat!

There was plenty of water and Powerade at the finish line, and I heard a rumor that there were pancakes but I never saw any. I was a little disappointed with the way that the medal looked. It wasn’t what they showed online, and the one that the 10k finishers got was nicer looking. 🙁 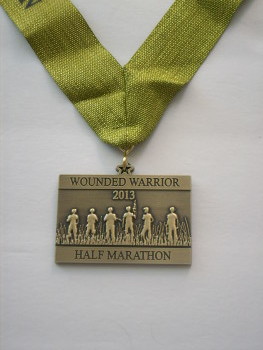 Would I do this race again? In a heartbeat! The course was virtually hill-less and the paved trail that we went off on was really nice. Course support was great and most importantly, this race benefits our troops!

Have you ever run a race in the rain?