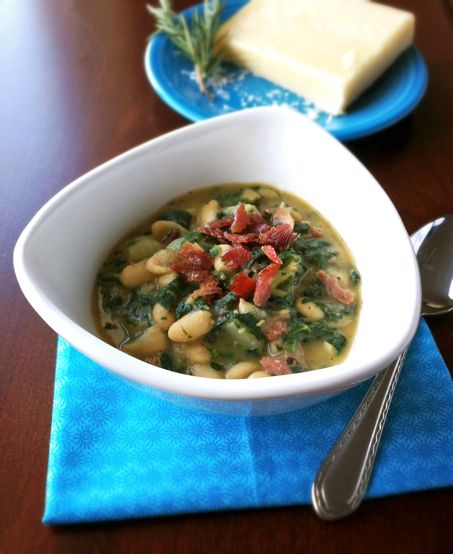 Today’s recipe was supposed to be an entirely different soup, but that’s going to have to wait for another day. Thanks to a defective lid on a pasta sauce jar, I couldn’t make that soup. When I went to open the jar, the lid turned and turned, but wouldn’t open. I could even turn it continuously in the opposite direction. It was the weirdest thing! I’ve never had a jar lid do that before. I had my husband come over to try to get it open for me. He got it open. Unfortunately, when it finally came open, it slung all over the place. All over his clothes, the counter top, cabinets and floor. I had JUST mopped the day before. Of course. 🙁

Since the lid was defective, I didn’t feel safe using the sauce. Neither one of us even knew if the lid had popped because we were distracted by the tomato sauce explosion. I didn’t have any tomatoes left in the pantry, so I had to come up with a different plan for lunch.

Oddly enough, later that day, I had a jar of salsa with a lid that had already been popped. I could not believe my bad luck in the kitchen that day. One maybe, but two jars in one day?

The good news is that this White Bean Potato and Spinach Soup turned out so good that I ended up with a new recipe for the blog after all! Yay! It’s pretty basic, and you may even have everything you need to make it in your pantry already!

I love the braised white beans at the chain restaurant, Zoe’s Kitchen.  Creamy white beans with rosemary. So yummy!

This soup has a similar consistency and is total comfort food in a bowl. I mean, come on. What is more comforting than a bowl of soup with potatoes, bacon and creamy white beans seasoned with fresh rosemary?  I strongly encourage you to use fresh, not dried here. It just wouldn’t be the same. Trust me.

So anyway, onto the recipe. This will serve two as a main dish or four people as a side dish. My husband and I scarfed it all down for lunch that day. This is a pretty thick soup, which is one of the things I really like about it. If you’d like a thinner soup, just add more chicken stock or water. I used turkey bacon, but you can certainly use regular bacon if you prefer. If you use regular bacon, you could just use some of the rendered bacon fat instead of adding another oil. Turkey bacon doesn’t render much fat, so a bit of oil is needed.

Hope you enjoy this soup as much as we did! 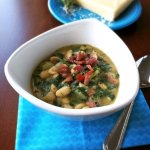