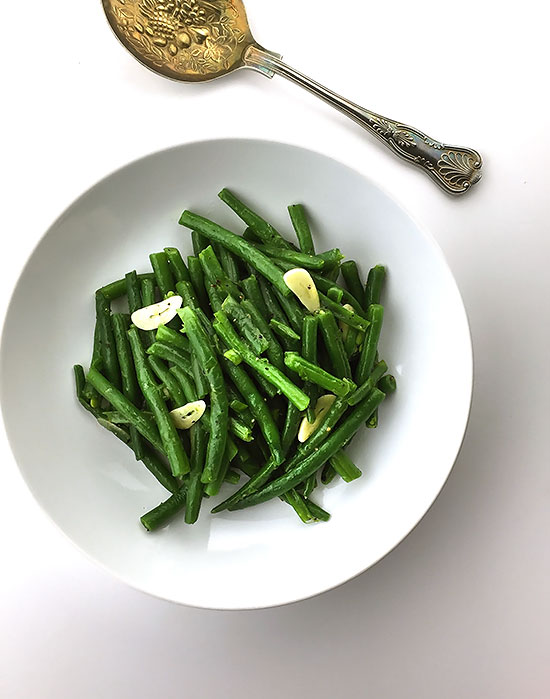 Today, I have one of the simplest side dish recipes ever. It is super quick to make, but is loaded with delicious flavor! We did a major grocery shopping trip this past Sunday afternoon, and I picked a bag of organic fresh green beans at Trader Joe’s. Speaking of which, TJ’s was insanely busy while we were there! We were dodging shopping carts left and right to get what we needed. I typically avoid grocery stores on Sunday because the stores are always crowded, but my fridge was bare. 🙁

Anyway, on to cooking the green beans. While you’re waiting for your pot of water to come to a boil, you can trim the ends of your green beans. If you’ve never trimmed green beans, here’s a tip on how to trim several at once.

Here’s where my recipe varies from most of the ones out there. Typically, recipes call for boiling the beans until just tender, which takes between 4-6 minutes. I prefer my green beans to be totally tender, so I let mine cook for 10 minutes. Of course, if you prefer your green beans to still be a bit crisp, you can cook them for the shorter amount of time. That’s completely up to you.

When the green beans have finished cooking, just use a colander to drain them and place into the large bowl. Add some black pepper to taste and then toss with the rest of the ingredients until the butter has melted and coated the beans. Enjoy!

Green Beans with Butter and Garlic

If you prefer your green beans to still be a bit crisp, simply cook them until just tender, about 4-6 minutes.