When we changed our diet several months ago, I had to find new recipes that were grain-free and lower in carbs than the dishes that I’d been making. Fortunately, I have found several amazing resources for not only recipes, but health advice. Some of these blogs are Paleo, and while we aren’t currently eating a Paleo diet, our diet does look similar. The only difference is we do still eat some dairy, nuts, and yes, even the occasional thin crust pizza. 🙂

Michelle Tam, the woman behind Nom Nom Paleo is not only a great recipe creator, but she also is an entertaining read. Her blog is usually one of the first places I head to for recipe ideas. She is a wife, mother of two, night time hospital pharmacist, and somehow she still manages to run a very successful blog and cook for her family. Wow!

Diane Sanfillipo is not only a recipe creator, but  also a Holistic Nutritionist. She has a best-selling book called Practical Paleo, which has a ton of health information as well as recipes. It is seriously the best and most comprehendible book I’ve seen on the Paleo Diet. She and Nutrtional Therapy Practitioner, Liz Wolfe have free weekly podcasts, where they discuss all kinds of health issues.

Diana and her husband, Andrew run an Organic Farm up in Massachusetts, and Diana is also certified in Nutritional Therapy. Two of my favorite Winter soup recipes have come from her blog. The Italian Sausage & Kale Soup is a big hit with my husband too. Her Lemon Spinach & Egg Soup (“Paleo Stracciatella”) is the perfect soup if  someone in your household  is feeling under the weather.

Heather is a mom to twin girls and a Paleo Diet follower. Her food pics are great, and all of the recipes I’ve tried so far have been very tasty!

Elana is a wife, mother, and published cook book author. After she and her son were diagnosed with Celiac disease, she had to learn a new way of cooking that would appease not only them, but the other two Non-Celiac members of the household. I find myself on her blog often and love trying her recipes.She has a new Paleo cook book coming out in June of this year that I am really looking forward to checking out!

Carrie is a wife to an Air Force test pilot, mother of two girls and a published cookbook author. Her food photography is wonderful and her recipes are delicious! She also includes a lot of information on food and health, and I’ve learned so much by reading her blog.

Danielle is the voice behind this blog, and she is a wife, mother and grain-free cook from the San Francisco Bay area. Her recipes are great for those following GAPS, SCD, Paleo, Primal and Gluten-Free diets. The recipes are labeled, which makes it easy to know if a recipe is compatible with your dietary needs.

This site is strictly Paleo recipes that are submitted by Paleo food bloggers, some of whom are listed above. It’s a place to go to find multiple Paleo recipes all in one place. I have found new blogs to read through this site, which is one reason I like it so much.

Chowstalker is a recipe sharing site similar to The Foodee. The recipes on this site may not all be strict Paleo, but they are mostly Paleo. Again, a great resource for being able to search through numerous recipes all in one place.

There are some other Paleo and Grain-Free sites that I go to, but the ones listed above are my go-to resources. They are full of great recipes and health information!

Do you have any Grain-Free or Paleo blogs that you love to read? 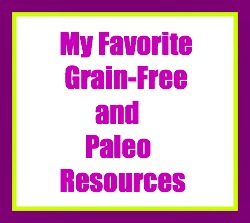