On Saturday, I celebrated my 36th birthday. Man, where did year 35 go?! I went on my last run as a 35 year old on Friday night. Just had to get one last run before I became an old lady. 😉 Not completely sure of the mileage, but it was somewhere around 3 miles.

Two whole eggs plus 1 egg white scrambled and half of a small avocado sliced. 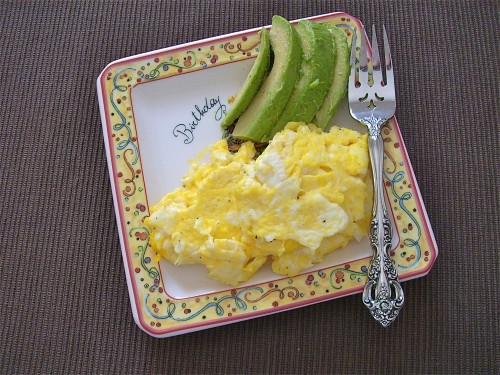 My mom gave me that birthday plate a couple of years ago, and I just had to pull it out and use it for my breakfast. It made my breakfast feel more special. 🙂

A birthday card from my sweet hubby! 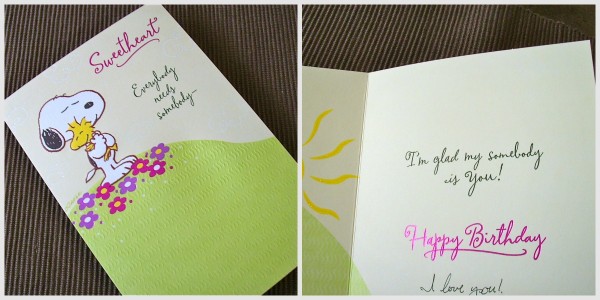 My parents had made plans to come up to spend the day with us for my birthday, and they arrived at our door around three o’clock Saturday. We were all pretty hungry since none of us had eaten since breakfast.

My mom told me to pick somewhere to go for a late lunch. She likes to try new places, and so I decided that I would take them to Anamia’s Tex-Mex. They just recently opened another location over in Plano. My husband and I had eaten at the one in Southlake after going to see the Christmas decorations at the Gaylord Texan back in December, and we both really liked it. 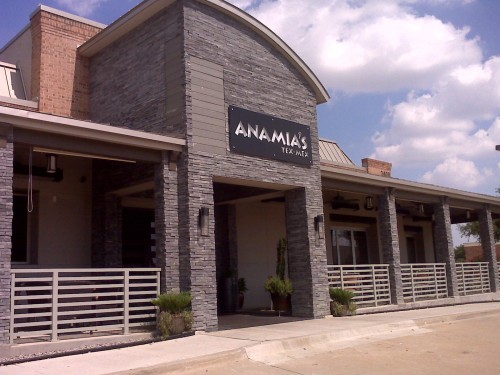 Since it was my birthday, I decided to splurge a little bit calorie/carb wise. I had about ten chips with salsa before our food arrived. The salsa was very good and spicy!

I hadn’t had any salad all week, and was really craving one, so I ordered the chicken fajita salad without dressing. 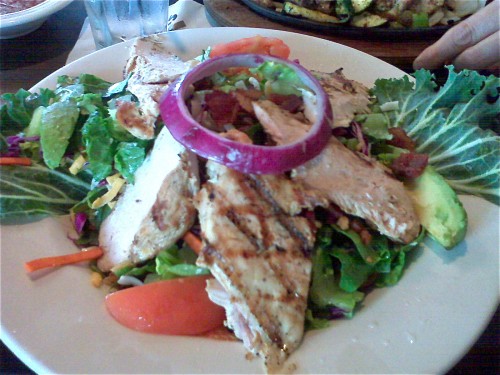 I really liked the way it was plated, and it was quite tasty. I mashed and stirred the avocado into the salad to sub as my dressing. I would definitely order that again.

My only complaint would be that the service was pretty slow, especially considering they really weren’t busy at all. 🙁

My mom’s entree was just about enough food for two people. She could only eat one of the two small chicken breasts that it came with, so my husband and I ate some of the second one. We weren’t going back home right away, so we couldn’t take it with us.

After we left there, we headed down the street to Paciugo to grab some gelato for dessert. My mom LOVES Paciugo! 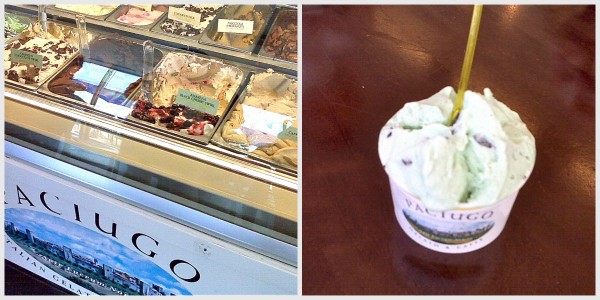 I chose a small cup of the mint chocolate chip, which was the perfect after lunch treat.

Later, we stopped at The Shops at Legacy in Plano, which is a combination retail, restaurant and residential area. We were going to go to one of the furniture stores there, but they were closed, so we walked around and checked out some of the other shops.

I could drop some major dough in this shop. They had some gorgeous Vietri pieces. 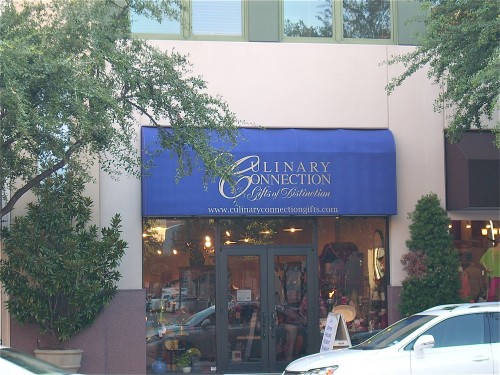 My mom couldn’t pass up this chocolate shop. The heavenly smell of chocolate hit us as soon as we walked in the door. 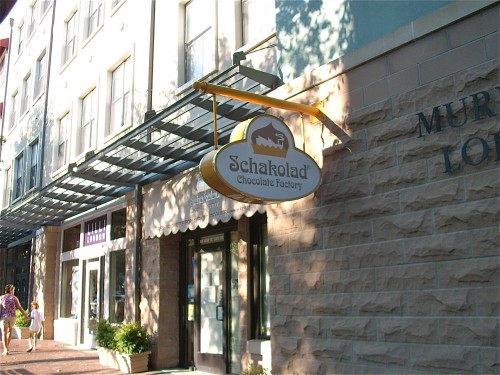 I had one piece of Italian Amaretto chocolate. So.Good. 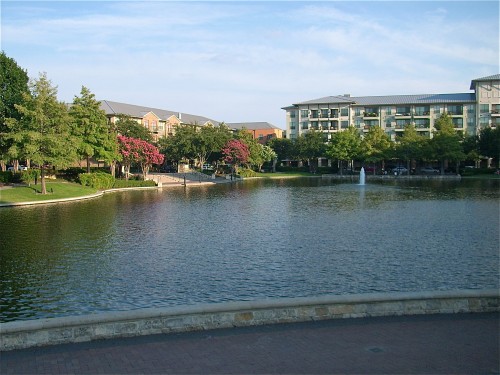 We went into the Village Burger Bar, but they were pretty packed, so we did a quick phone search to see where another burger joint might be close by.

Kenny’s Burger Joint was pretty close and had good reviews. 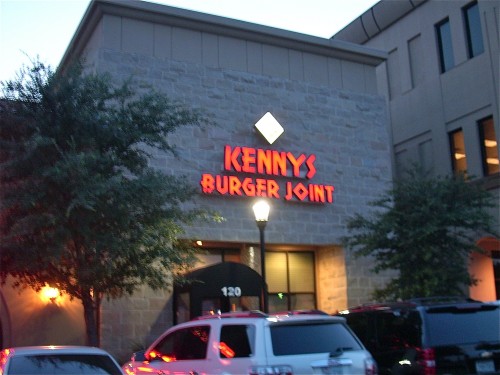 Kenny’s  is just a few miles from our house, but we had never been there before. This place was pretty full too, but the wait was only supposed to be about 15 minutes, so we decided to stay.

I ordered a Bud’s Queso Burger, which was served open faced on a ciabatta bun. It had pepperjack cheese (I think?), sauteed onions, bacon and jalapenos. 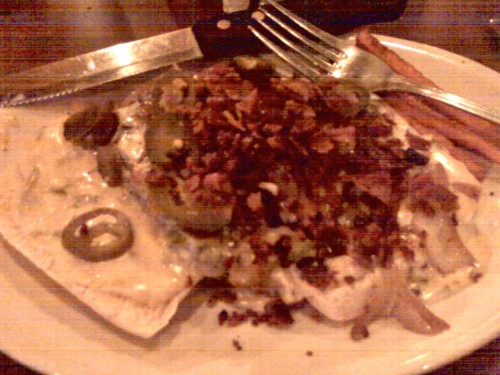 (It was fairly dark in there, so I couldn’t get good pic)

Their burgers are cooked over Hickory on a wood burning grill. The meat had just the right amount of good smoky flavor to it. I ate all of the meat on my plate, had a few of my mom’s sweet potato fries, but only ate part of my ciabatta bun. This is definitely a place I would go back to.

We finished our day off with a cup of coffee at Starbucks. I had a tall iced half-caff Americano. 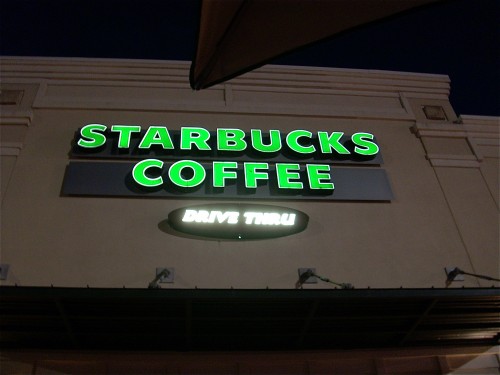 It was an awesome birthday, and I can’t thank my parents enough for treating us to a day of fun. Thanks Mom and Dad!!!

What’s the best birthday you’ve ever had?