Several months ago, I read online that the Wayne family was going to be auctioning off some of the Duke’s personal items. Prior to the auction, part of the collection would be be going on a short tour. The World Headquarters of Heritage Auctions (who is handling the auction) happens to be in Dallas, so one of the few stops would be there. Yay!

I excitedly wrote down the date on a piece of paper, and placed it on my desk. Months passed, and I forgot all about it. I can’t believe I forgot about, but I did. It was only by chance that I happened to find that little piece of paper on the Saturday of the weekend long exhibit. I almost missed it! I would have been really upset if I realized later that the date had already past. We made plans to go the next afternoon. 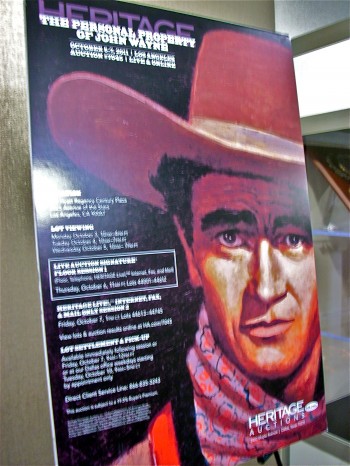 At the end of the tour, the personal items of John Wayne will be auctioned off  online, and in Los Angeles on October 6-7, 2011. The proceeds will go to John Wayne Enterprises, which funds and supports the John Wayne Cancer Foundation.

A few of the items up for auction include: 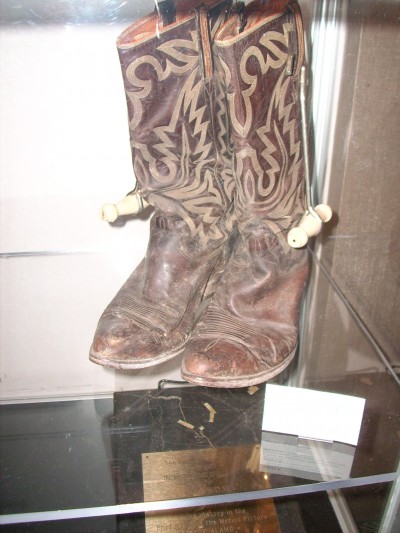 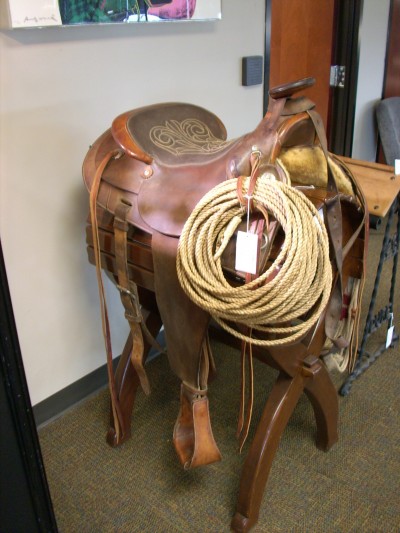 A working script from the movie “Rio Bravo”, pages folded in half by the Duke, which was his habit with scripts that he used on set. 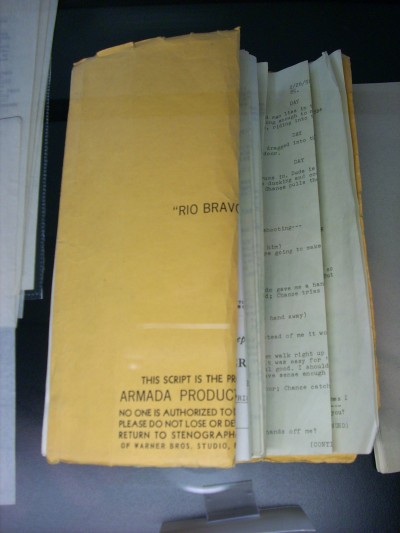 A partial script from “The Alamo”. 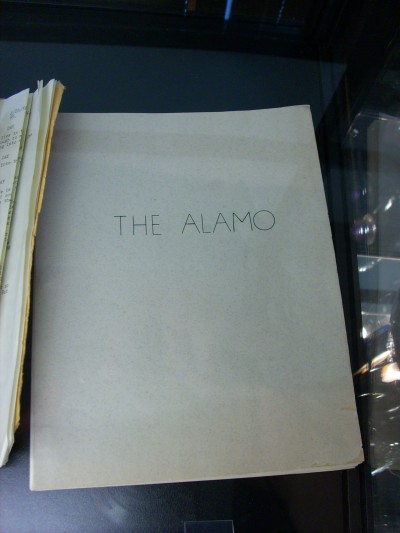 Personal letters written to him by: 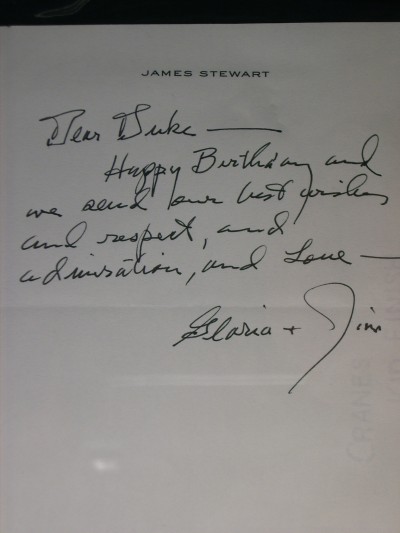 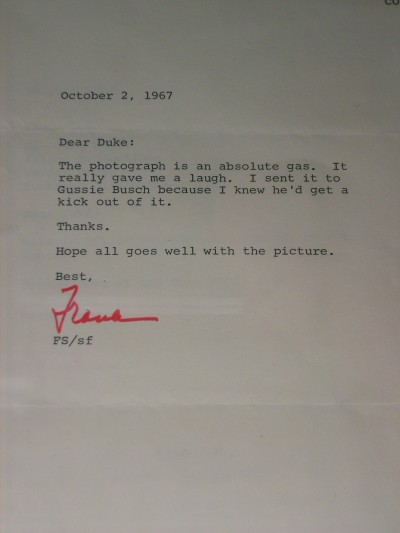 and Ronald Reagan. This letter was hand-written by Ronald, and is signed by Nancy as well. 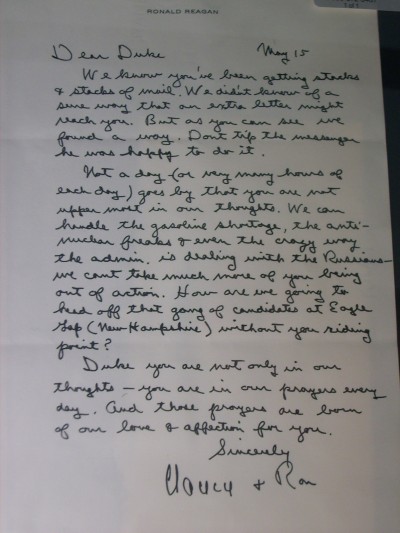 One item that I think would be really neat to have, is his last driver’s license. Apparently, other people think it is pretty cool too. The current bid (at this time) is $5,200. 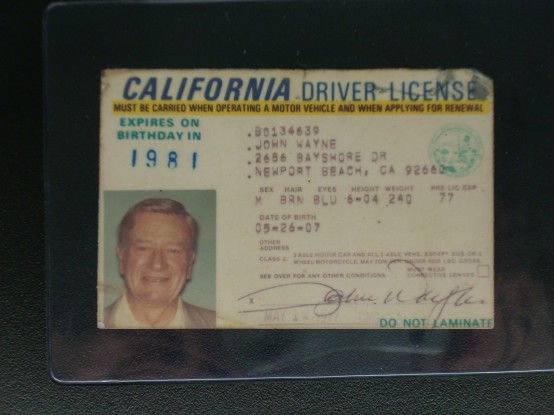 Other personal items include John Wayne’s: 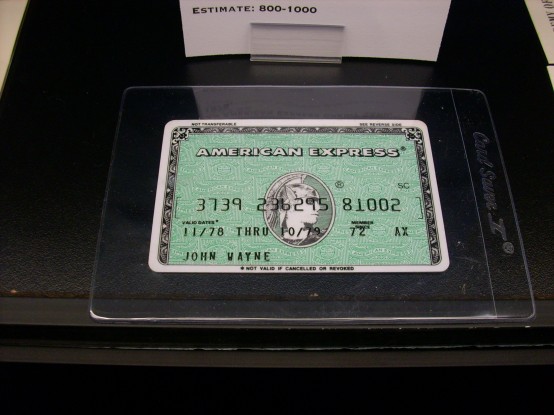 A twice-signed passport. Note that he’s wearing a costume shirt. 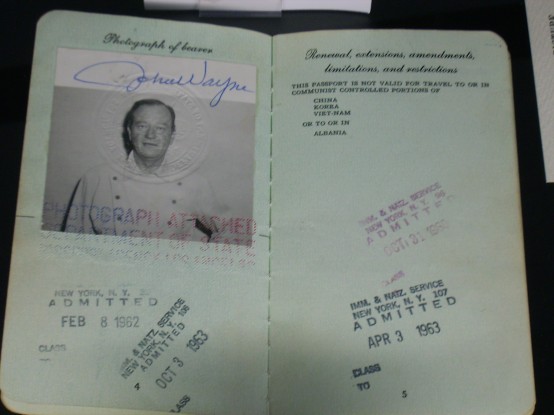 His ‘American’ id card, which he probably ordered from a catalog. 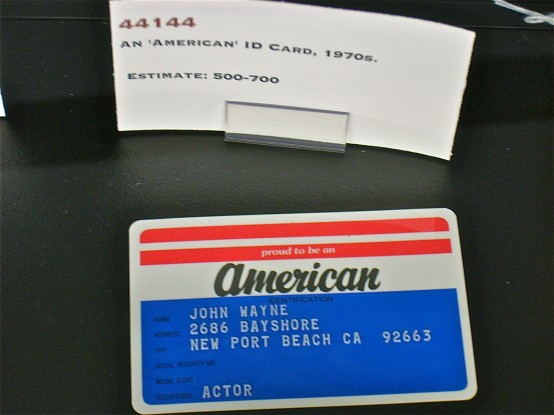 Several of the hats that he wore in his movies are also up for auction. 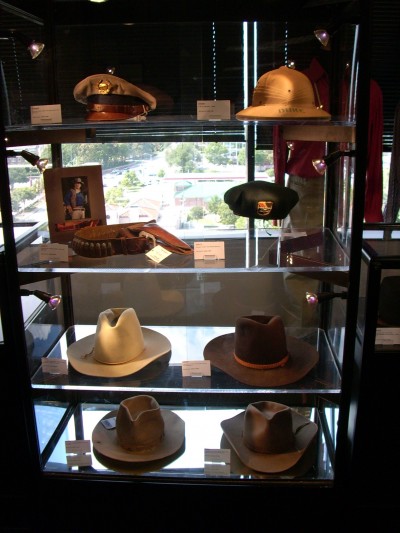 The cowboy hat he wore in “McClintock, “El Dorado”, and “The War Wagon”. 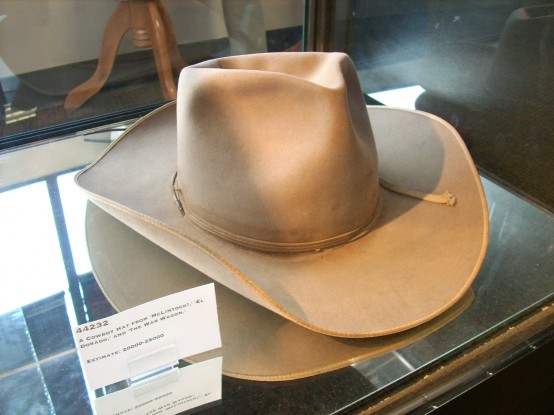 The brown felt hat he wore in “Cahill U.S. Marshall”. 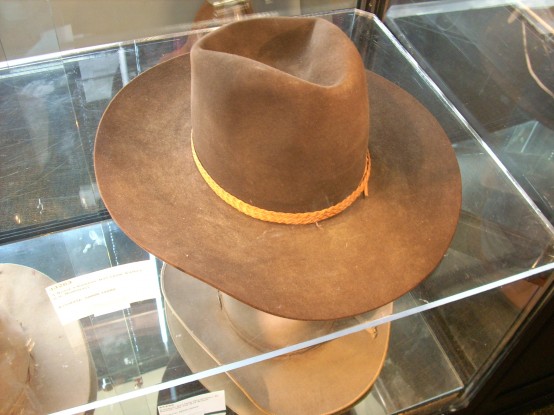 A Stetson cowboy hat from “The Man Who Shot Liberty Valance”. 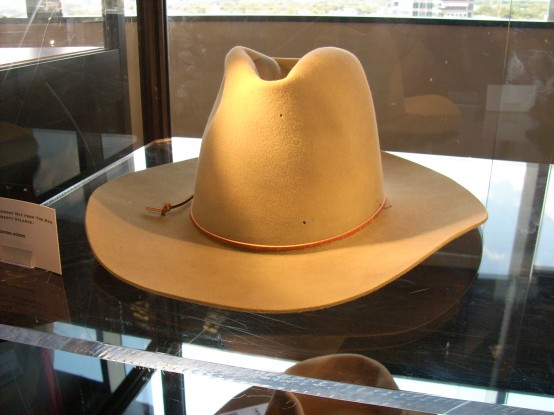 This holster and gun belt was worn by the “Duke” in the movie El Dorado, and possibly other films. 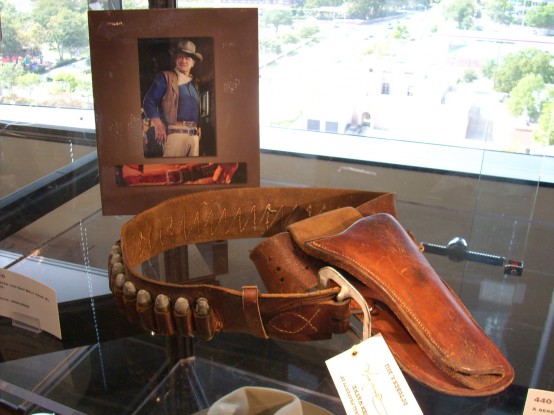 Numerous awards and trophies belonging to the “Duke” are on the auction block as well. 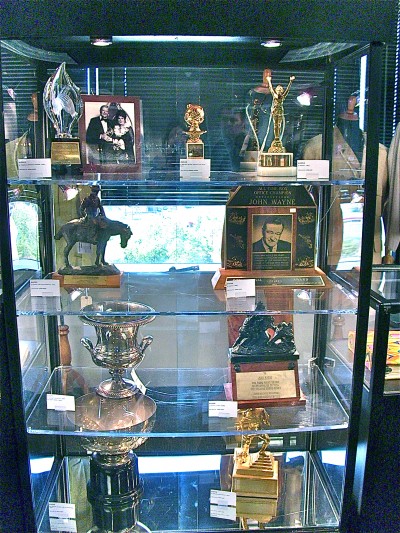 In this case, there was a People’s Choice Award from 1976. Note the picture in the background. It’s John Wayne with Maureen O’Hara, who presented him with the award that year. They were so good together on screen! 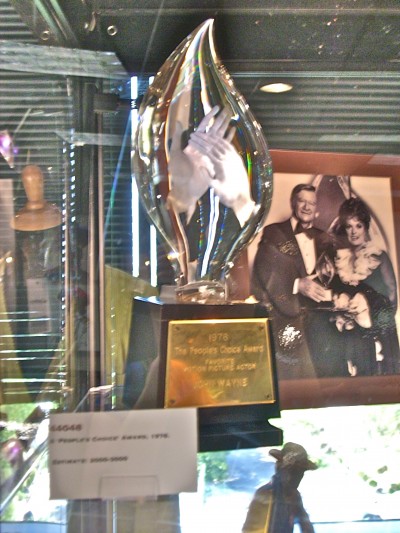 His Golden Globe for “True Grit”. 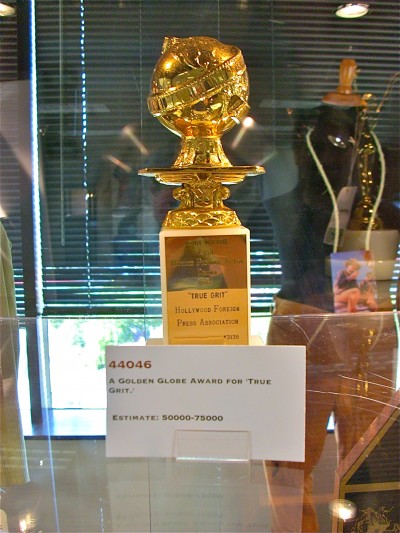 There were also several costumes there on display. At first, I thought, he was smaller than I imagined. Then, I realized that the costumes were pinned in the back because the mannequins were so small. 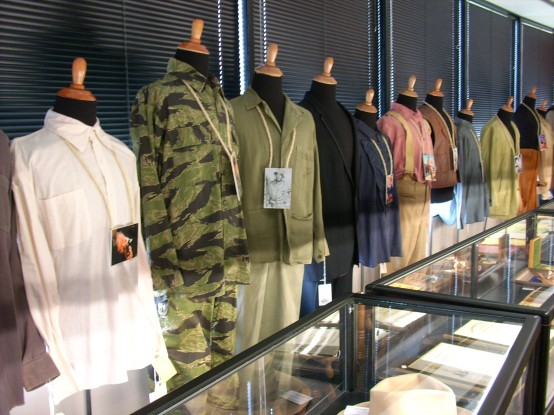 Fans of the movie McClintock might recognize this suit. 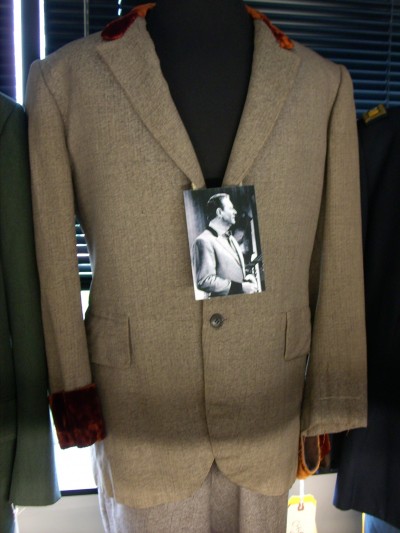 John Wayne loved America, and was extremely supportive of it’s military. Moved by the anti-war sentiment during the height our involvement in the Vietnam war, he made the movie “The Green Berets”. 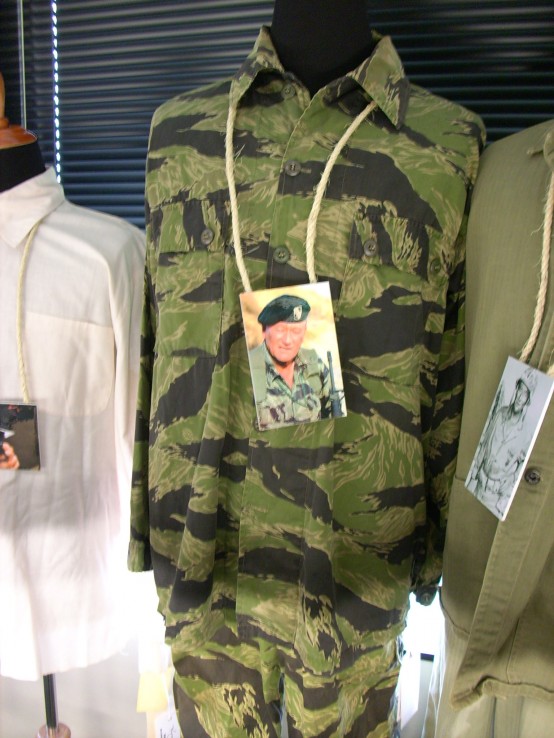 This next item is sure to be a favorite at the auction as well. Wayne’s eye patch from “True Grit”, makeup still evident on the back. It’s actually one of several that he wore during filming. In Herb Fagan’s 1996 book, “Duke, We’re glad we knew you”, his longtime costumer was quoted as saying “…Duke…needed a fresh (eye) patch every day. Each morning he’d check the thing to see if there was any makeup inside it.” 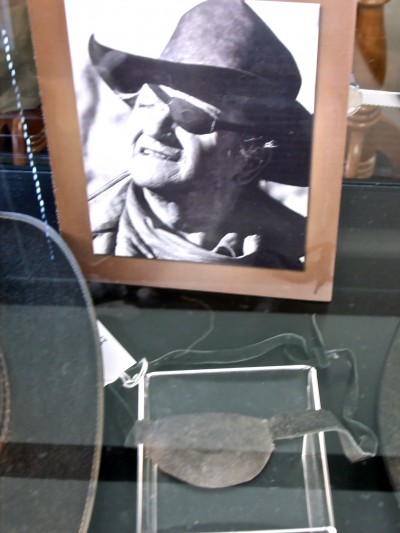 John Wayne is beloved by millions all over the world. In January of this year, he ranked third among the list of America’s favorite film stars, according to a Harris Poll. He is the only deceased star on the list, and also the only star to appear on the poll every year since it began in 1994. To this day, he remains an icon who symbolized true American values and principles.

I am so glad that I had the opportunity to view these items in person, and I hope that you enjoyed taking a look at them here as well.  There are several more items up for auction besides these. If you’d like to see more of them, be sure to check them out on the auction house website.

What is your favorite John Wayne movie?

If you could bid on any of these items, which one would it be and why?